Camping with Onty and Uncle.

22 Agu, 2022 Posting Komentar
Hello guys! Like what i'm promise in last week in, i'll make camping in Ranca Upas, Ciwidey Bandung.
As usual, we start driving to Ranca Upas is in blind morning. Of course the sky is still dark. One reason why me starting drove to Ranca Upas in morning is: We avoid to get the road to fulled with car.
Differently like usually camping, now me camping with Onty and Uncle, who name is: Putra Merdeka, Tante Ani ( with her child, Nabila, who 4 years-old), and Tante Loli ( Putra Merdeka wife). Usually we camping just with: Mother, Father, Aisya, Nukman, and Medina. But now, Om Deka (That's how i call Putra Merdeka) ask ( to my Father, who is sibling brother of Putra Merdeka) to join with us to camping, not just Om Deka, Tante Ani and Tante Loli also ask to join with us to camping. And my father allows them to join with us.
Finally, we reached to the location target, Ranca Upas, Ciwidey Bandung. We pay for enter to the camping area.
I'm so relieved that the car is can park near of where us build the tent later. If not, you can imagane guys! Firsly, my father build the flysheet, helped by Om Deka and Me ( a little bit, but i helped too). Cause of work together to build the flysheet, the flysheet it's only take a little time to make the flysheet stand. After build the flysheet, we breakfast in a footprint mat. I don't know why i eat ‎just a few mouthfuls of spoons‎.
My father is build the tent, of course helped by Om Deka and Me ( little bit, but okay), but just a few minute later, Om Deka and Me just watched my father build the tent while playing card, and My Mother, Tante Ani, and Tante Loli helped my mother to cook the lunch
Finally, my father already make the tent ( three simple tent, not just one).
After me play card with Om Deka, Aisya, and Nukman, the adzan has called me to shalat.Fortunely, a mushola is near of us, so is not take to many energy to go to mushola. After shalat, the lunch already served, what we wait now? Of course, let's go eating the delicious lunch!
I playing a swing with Om Deka and mein Bruder und mein Schwester. Want to know what I mean? Checking it in google translate! That's German's Language. In night, the temperature of Ranca Upas, decrease fast, until 14 celcius! Fortunely, Om Deka brought a sweater, a jacket, and a sarong to protect body to get very cold, but a sweater, a jacket, and a sarong is not enough to make body felt warm.
Now the menu of dinner is: Sate Ayam Kecap! A tradisional dish of Indonesia, but is less delicious after i eating some of Sate Ayam Kecap, the chicken is to hard to bit, and that making the sate is deliciousless.
Is almost 8:00 P.M, time to go bed, but before take sleep in the comfortable tent, we play funny puzzles about food.
In the tent, is still felt cold, but little bit warm, i don't know how to write exactly about how i felt in the tent.
4:00 A.M.
I've heard from Om Deka, if Tante Ani is slittling with a loudly sound, Om Deka say, " Tanti Ani is too sleepy, no need to adapt to camp environment," Om Deka say while laughing.
" When sleep, i've heard a spooky voices," Tante Loli says, already get out from the tent, " a footsteps sound," she continued.
In morning, i felt happy because is fun to camping with Om Deka, Tante Ani, and Tante Loli. Om Deka is a humorous person.
I still have time to play badminton with Om Deka. Although the play is not good, i still felt happy.
We also can take a several picture in a place ( still in Ranca Upas, but in another camp area), there is a favorite to take a wedding picture.
I'll give you a example photo of many photo. 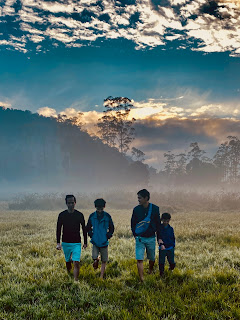 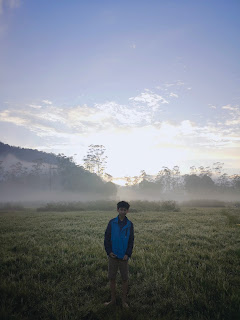 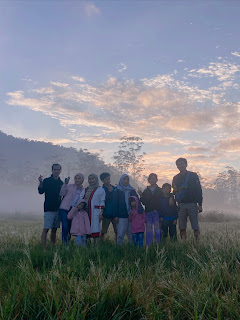 After have fun in Ranca Upas, we must to go again, now the target location is: Salman Institut Technology Bandung Mosque.
Go to Salman ITB Mosque is take a patience. For example: My father never prediction to get the road is fulled in a road, my father must to strunggle to get free from the road and find what cause the road fulled?
Want know what the cause?
The road fulled cause in some restaurant is in wedding events. Oah! If you is in here, you must to angry and complained the restaurant.
My father used toll to reached Salman ITB Mosque. I'm very scared when the rain down, so the road can be smooth.
But finally, we reached to the next target, Salman ITB Mosque, my father must to strunggle to find a empty parking, but none left, so my father parking the car in outside of the Salman ITB Mosque.
My mother, Tante Ani, and Tante Loli, after reached the Salman ITB Mosque. Directly looking for a snack, they're go to a Lumpiah Basah. Personally, i like this lumpiah basah, cause the delicious of this tradisional dish of Indonesia.
In Salman ITB Mosque is very boring, i don't have prediction rain down, if the rain is not down, i can play badminton with Om Deka, or playing football in the field. But now, i can't doing anything, just sit and talk.
Salman ITB Mosque is in renovation, so the condition is not good for sleep in for two days, coupled with a bapak-bapak not have manners, they're mark many table that has serve for mahasiswa ITB who want to learn. But now, the bapak-bapak not've manners mark all of the table, my father commenting they action, my father personally is feel angry about the gentlements not have manners. Whereas, the table is serve just for the mahasiswa to learn. But, the gentlemens not've manners mark all the table, and no one left for mahasiswa to learn.
So, i'm just sit, and watch the gentlemens not have manners.
The boring in Salman ITB Mosque added, because Om Deka want to go to Rumah Mode, he says, " he names is Mode," that's make me laugh.
Finally, I'm just spend time in boring.
Om Deka arrive to Salman ITB Mosque after I want to go sleep.
When i sleep. I don't know who wakes me up. But, the exactly i know is, my father/mother told me to move to the second floor. Because I'm in sleepy condition, so I not object at all.
Then I sleep again in the top floor. But, i get wake up again. Now, a mahasiswa of ITB, told to My mother, Tante Loli, and Tante Ani to move to the third floor again, a multifunction floor. But my father doesn't want it. Finally, after my father proposing with the mahasiswa, the mahasiswa allow my mother, Tante Loli, and Tante Ani. But, they want to data My Mother, Tante Loli, and Tante Ani.
Finally, i can sleep again.
When I wakes up, the clock point to 4:00 P.M. Time to back to home, Om Deka, Tante Loli, and Tante Ani go back to their home too, but with different road, they're use toll. Of course, to more quickly arrive to their home. My father don't want to use toll, my father used another road.
We stoped a lot in various place, like a warung ( that is empty, who have the warung isn't open him/her warung), to breakfast.
When we reached to Bogor, my father want to buy Tape, which is obvisius, not tape to wrapped a packet or a box, is was a singkong that is fermentation. I don't like Tape.
Finally, we reached to our home, I'm felt sad a little bit, because camping with Om Deka, Tante Loli, and Tante Ani, is fun. Om Deka want to camping again, that he said.
Thanks for you who read my blog.