Hello guys. How are you today? Are you know about Celebration Independence of Indonesia?

Because I'm a Indonesian people, so i celebrate the Independence of Indonesia by join the competition. So, the story ( is the true story) start.

Finally, after waiting for this day, the day finally come. Before the competition is start, I must to cleaning my body.

But, I'm not've a shirt that's nether red nor white. But my father've a shirt that used to bike, the shirt have a Indonesia flag, so my mother told to use it.

I'm leaving home first. Because, usually, my mother if want to go outside must to make-up, and make-up can take almost 30 minutes! I'm go to where the competition will be happen. The competition is in a badminton field.

After arriving at the badminton court, I saw that there were already people. But, it's not full yet. I sat down with Opa Hendra, whose house was not far to my house, just a few blocks away. If you ask, "what competitions might be signed to join." 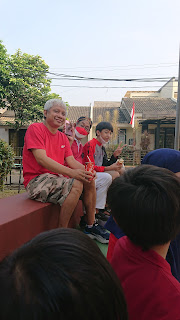 As a result, Opa Hendra told me, if he also participated in the Airplane Paper competition. Before the competition started, the organizers asked questions ( door prizes, who answered the questions, the committee gave prizes to him). And, in case, my mother raised her hand, wanting to answer the question, and the others also raised their hands.

Fortunately, brother, win the competition. Won the first place. So, my brother will get a reward in the evening.

The next competition is, Throw Ball, for children. Especially, children who are 5 years old. My sister ( Medina) competed. But, he won the second place! Passable.

The next competition is, Cursing Beads. My sister ( Nukman) and my sister ( Aisya) decided to take part in the competition. They will be equal enemies. Because, Nukman and Aisya are begginers, who only use chopsticks just for this competition. 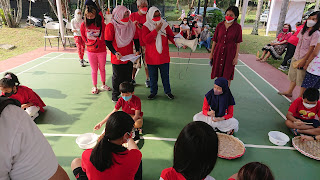 Because, Aisya is a rookie who just used chopsticks 'yesterday afternoon'. But, he can win the third place! Now you can know, why I say this is an achievement. 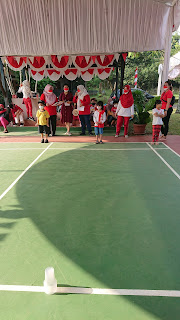 But, eventually, the competition could move on to the next one. But, before the competition started, the organizers wanted door prizes. My mother, trouble me to join the doorman, so... I was forced to do so. But, who knows... I won the door prize. My first prize. But, it's okay! Paper Airplane Competition!! Before I moved to the long table, the organizers had to call who participated in the Airplane Paper Competition.

Something funny, I was called, "Sir Elman!" But it's wrong! I'm just a student... Perhaps, the organizing committee thought I was a gentleman?

After the competition, I played with my friend. Playing with my bike. I played with my friends, played robbers and cops. My friend, Chris, who is a brand of bikes is Polygon, is very fast. I must be hanged to catch him! But, the result is miserable... I can catch it! But.... Before I could catch Chris, my mother told me to go back to the house.

" NO!! I want to go to Suave Night!" I say, in a loud voice. But, my mother kept telling me to follow my dad to go to Jakarta, wanting to COD with whom he ordered someone's phone at Shopee.

So, in the evening, I was forced to join my father going to Jakarta. But, it's not bad anymore. I can do anything that's fun!